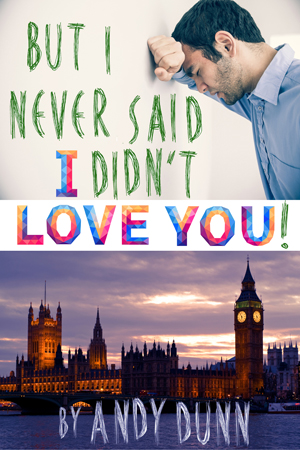 Originally titled Frozen Haddock of Life, based on a quote from Brian Parker-Eddy, one of the characters, But I Never Said I Didn’t Love You! was an idea I’d been kicking around for some time.  An early computer file is dated 2001, but I think it might have been around even longer than that.  I was originally going to use the idea for National Novel Writing Month in 2002, but I missed the registration for it that year — I found out about it around November 23.  Not enough time to complete a 50,000-word novel.  (I like a challenge as much as the next guy, but…)  I held on to it until 2003, but missed registration again.  Finally, I just bookmarked it and put it at the top until 2004, when I was finally able to register.

This was also going to be the first time I was able to use Writer’s Dreamkit, plotting software based on the Dramatica system.  Originally, the story was going to be set in Chicago, Callum was named Jesse and much more clingy, Brian was a bit more of a prick, and Simon was named Shane and confined to a mere walk-on in the final chapter.  When I started, I quickly changed the locale to London, as I surmised somehow Callum was Scottish, and it would be more common to hear the accent there than in Chicago.  About three chapters in, I liked the interaction between Brian and Callum too much to keep the original ending.  The story wasn’t as humorous, either.